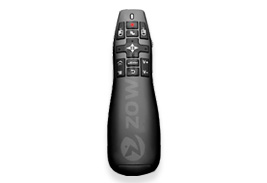 Fly mouse is a concept promoted in 2011. It means the mouse can flly in the air and its alternate name is air mouse, It can sense the direction and the change of speed with a built-in gyroscope. People can control move of cursor of electronic products like  android TV box and computer by moving air mouse. People do not need the traditional keyboard and their hands can be most free. With fly mouse, users can control computer devices, play motion sensing games, surf on the Internet and chat with friends on the couch.

What is the Function of Fly Mouse?

Fly mouse’s signal is not transmitted by Bluetooth or IR but 2.4GHz transmission mode. It has the general function like keyboard and mouse and it also has voice function and sense function. So it means that it can be used in the operation of UI of smart TV , smart TV box/stick, tablet, IPTV, PS3, web TV, PC and Google TV, etc.

Fly mouse has the following advantages:

2.Keys have control function and it can be friendly used in android system and TV box.

3.Fly mouse can be compared favorably with desktop mouse with its smart anti-shake design.

What Fly Mouse Can Do?